Posted on September 10, 2021 by Faisal Ismail Leave a comment

This Samsung MZ-77E2T0B/AM 870 EVO Series 2TB Solid State Drive features sequential read speeds of up to 560 MB/s and sequential write speeds of up to 530 MB/s, making it ideal for storing and rendering large format files such as 4K video and 3D data transfer.

The 870 EVO SSD has a 2.5″ form factor, which is compatible with a wide range of notebooks and desktop computers, and utilizes the SATA III interface. Also featured is 2GB of LPDDR4 cache memory, an MKX controller, 1XXL V-NAND 3-bit MLC flash memory, and an endurance of up to 2400TB. 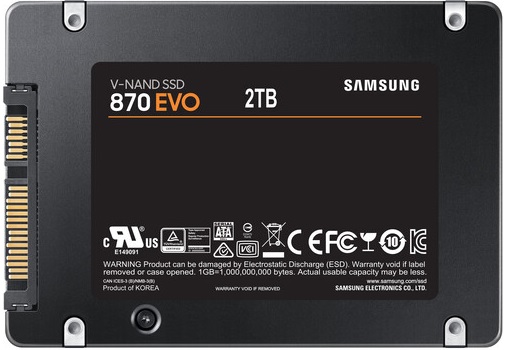 The 870 EVO SSD maximizes the SATA interface and accelerates write speeds and maintains long-term high performance with a larger variable buffer that lets the SSD work faster, longer. The SSD has been compatibility tested for major host systems and applications, including chipsets, motherboards, NAS, and video recording devices.

Using the 870 EVO SSD is as simple as plugging it into the standard 2.5-inch form factor on your desktop PC or laptop — the renewed migration software takes care of the rest.