How fast is Intel Core i9 than AMD Ryzen 7 Processor?

The processors of the future are right here in front of us. A few days ago AMD launched Ryzen 7, and now Intel has launched Core i9. The new processors are not only faster, but they outclass all other ones in the market by a large margin…

Intel Core i9 vs AMD Ryzen 7

AMD Ryzen 7 has eight CPU cores that translate to 16 threads considering each core has two threads or logical cores. The base clock speed is 3Ghz. Overclocking speed is 3.7 GHz, but not many users overclock so that it will be 3.0GHz for most. The L3 cache is 16MB, and the processor is unlocked (overclockable). It runs at 64watts and supports DDR4 RAM modules. The processor is currently available for desktop computers at a price of $299 & $599.

Intel has launched five different processors under core-i9 processor series. The processors’ cores range from 10 to 18 and have threads 20 to 36, considering each core has two threads or two logical cores. The speed of two core i9 processors 7900K and 7920K have been revealed by Intel, while other three including 7940X, 7960X and 7980X are still not yet revealed.

You should note that starting L3 cache of Intel Core i9 processors is 13.75MB.

Ryzen 7 has Sense MI technology incorporated in it. The Sense MI is a collection of powerful tools to help you optimize performance by using machine intelligence. The result is accelerated performance and minimal power consumption.

Similar to Ryzen 7, Core i9 possesses a couple of features itself. First, the processor is already optimized with the base frequency of 3.30 GHz that can be increased to a frequency of 4.30GHz. You should note that Core i9 or Core X series has the acronym ‘X’ is in it, where X means Extreme. It cannot be overclocked to 5.0GHz without proper cooling. However, Intel Turbo Boost 3.0 allows two of its cores to reach even more frequency by identifying the best performing cores of the processor and increasing their power using thermal headroom.

What to expect from high-numbered cores? 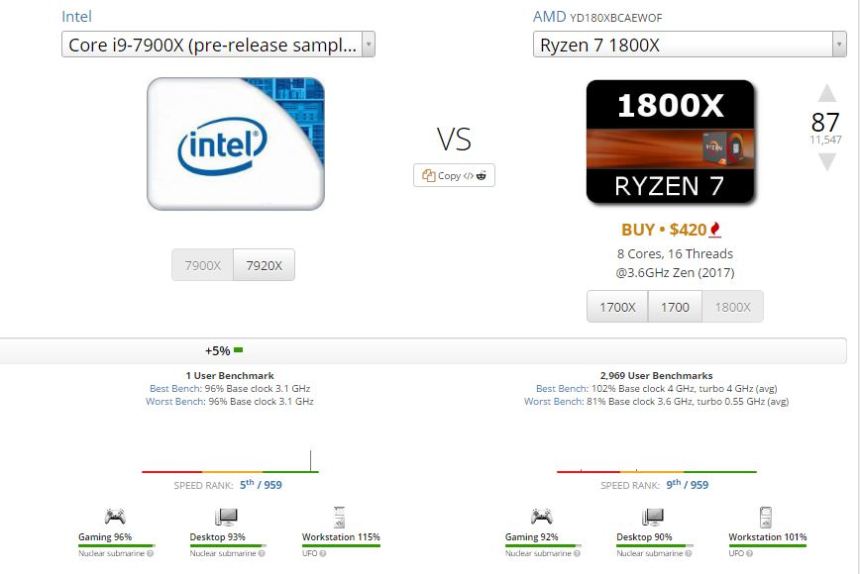 Ryzen 7 is a desktop CPU for addressing multiple needs including playing games, rendering in 3D and analyzing tons of business data. These processors are low-cost in comparison with their counterpart Core i9 processors and provide better performance per dollar.

About Intel Core i9:

Intel has released Core i9 CPUs under Core X series recently. The processors have 10 to 18 cores. These are released for data-intensive tasks such as virtual reality application development, data analysis, and for tasks where even more cores are required to perform operations, such as managing workstations, servers, and applications and data on the cloud.

Are these CPU Processors for you?

AMD Ryzen 7 CPUs are targeted towards gamers, video editors and high-performance app developers in home and enterprises because of their low price. They are even more affordable than Core i7 CPUs, so they have a better attraction for gamers and video makers.

On the other hand, CPU Chip on Intel Core i9 processors are not for you if you want to just play games or render high-quality videos. Even a Core i7 processor can do that. But if you are doing these tasks in a group, let’s say a server is powering these software applications then yes you might be better off with a single processor that can achieve these tasks. of course, Core i9 won’t cut it here as the same tasks can be done with a core i7 CPU. But the number of users exceed or extreme speed is required, then may be Intel Core i9 chip will come in handy. At the moment these are targeted towards enterprises, where large scale manufacturing requires tons of operations to be processed in a second.

The price of AMD Ryzen 7 is between $400-$500 while that of Intel Core i9 is starting from $999. So, there is a big difference between the two. Of course, the Intel Core i9 is targeting workstation and server computers due to its two-dozen core performance. While, AMD is still affordable and with-in range of most computer enthusiasts. But we can say one thing for sure, both of these processors’ series are the future of computing.

Where to buy them?

Both the chips AMD Ryzen 7 and Intel Core i9 can be bought through Memory4less.com. The chip Intel Core i9 is not yet available though, so you can only get AMD Ryzen 7 CPUs at the moment. Order today for fast delivery.

Intel Core i9 Series’ lowest CPU is around 23 percent faster than AMD Ryzen 7’s highest processor, according to User benchmark. This is because of the Instructions Per Cycle (IPC) execution. The AMD processors use eight-cores in comparison with Intel CPUs that use 10-cores.

Of course, these results vary for each person. But the purpose of showing them here is to let you know about how powerful Intel Core i9 is in comparison with AMD Ryzen 7.

Can we use Intel Core i9 processors in desktop computers? What do you think? Let us know in the comments below.