As technologists develop artificially intelligent systems for driver-less cars, internet of things, digital currencies, virtual reality applications, we are truly in need of high capacity hard drives that can take care of our storage needs.

According to Qz.com, a single autonomous car sends around 25 GB of data each hour to the cloud. That is around 600 GB of data a day and 18,000 GB of data a month. Now, you can calculate the estimates about how much hard drives a data center will require to host this much data.

And it is just the connected cars… do not forget connected homes, mobile, desktop and social media data that is being sent to the clouds. Moreover, this data is just increasing in size every year and that’s why the demand for more high-capacity hard drives is on the rise.

So what is the solution to save this much amount of data?

Many companies have produced their own versions of enterprise-level hard drives but Hitachi’s Helium-based Ultrastar hard drive is one of the best options for enterprise server systems in the market. Its HGST HE 12 is the first 12 TB hard drive to be made.

The drive is built by Hitachi under the direction of Western Digital, which acquired it in 2012.

Below is a comparison of HE 12 by Hitachi and 12TB Enterprise hard drive by Seagate. As you can see, both are almost same in specifications.

Being based on helium technology makes these hard drives faster, cooler and silent. Because of their small form-factor, these are perfect for use in server racks of any choice. In fact, the installation is hassle-free and the data center administrators will find it easier to integrate these with-in the already operational servers. 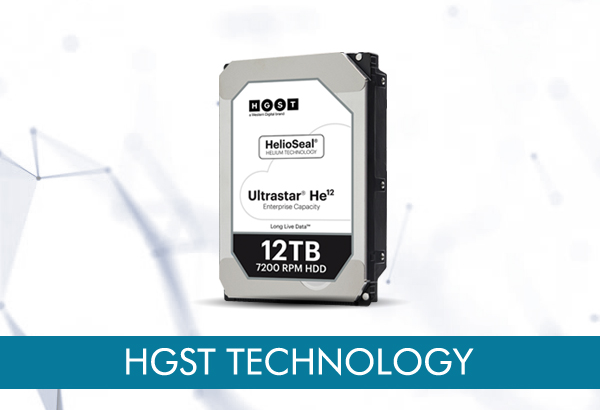 HGST Ultrastar HE12 is a 12TB standard 3.5-inch form factor hard drives that use Perpendicular Magnetic Recording (PMR) technology to store data on the disk surface.

The drives have varying speed depending on their interfaces. With SATA interface, the HGST Ultrastar HE12 hard drive provides 6GB/s, while with SAS interface the drives can provide 12GB/s speed. The drives are available with both interfaces.

According to tests carried out by Hitachi, the drives withstood 1,000 hours with no seal degradation. A total of 5,000 drives were tested for 1,000 hours bringing the total combined to 5 million hours of rigorous testing.

The drives are made with a few important features in mind. These have instant secure erase option that deletes every single bit of data on the disk instantly, instead of taking hours – a norm in higher capacity hard drives. The high-capacity hard drives even take hours to delete data from the disks.

These drives have Self-Encrypting Drive (SED) enabled that allows them to work securely at all times. Moreover, in case of theft, the drives are rendered useless and no thief can recover the media available on the hard drives.

These drives are capable of using the advanced format of data storage known as ‘4Kn’. This storage system is more reliable and provides extra space to the user by combining data that would have been stored on 512-byte blocks into a single 4096-byte (4K) block. (Advanced Format)

Why use Helium in HGST Ultrastar HE12?

The unique seller of this drive is helium. Why it used helium?

Helium is being used in hard drives from a long time. It goes back to 1989 when the helium-filled storage drives started appearing in the market. The helium reduces vibration and keeps the drives cooler and that is one sole reason of using Helium in HGST Ultrastar hard drives. They decrease the cost of a dollar per terabyte. Moreover, as there is less friction in the disks on the hard drives, it takes less movement and thus the drives run cooler and require less voltage to operate. The end result is more energy savings and faster hard drives.

By using helium in Hitachi’s HGST Ultrastar, the manufacturers were able to increase the number of disks in the drive, thus driving storage capacity from 10TB to 12TB.

What to look for while buying HGST Ultrastar HE12?

You need to ask yourself if these hard drives are for you. Do you operate a data center that needs high-capacity, performance-rich hard drives? If so, then you the drive would be a good match for you.

These are especially made for data-centers where a huge amount of data is being written on the disks and the space requirement is a problem. With more terabyte storage in a single 3.5inch hard drive, it is easier to increase capacity while saving space.

Hitachi’s HGST hard drives are being built in three countries of the world including Singapore, Thailand and China. The company started building the hard drives in Singapore and it took it 15 months to build first million hard drives. This was due to the number of tests being run to calculate the efficiency of these helium-filled hard drives. In the second 18 months, the company shipped 10 million HGST hard drives.

The capacities of these disk drives range from 6TB to 12TB.