Posted on September 16, 2022 by Faisal Ismail Leave a comment

Single vs. Dual-Rank RAM: Which Memory Type Will Boost Performance?

Whether upgrading your server memory or building a new gaming PC, it is necessary to ensure that a suitable memory module is selected to achieve maximum productivity. In this blog, we will differentiate single-rank and dual-rank memory to help you understand the differences between these two types of memory modules, what is single-rank and dual-rank, and which is better for your system.

Here’s all you need to know about single-rank vs. dual-rank memory.

What is memory rank?

Memory rank – a term created by JEDEC helps with differentiating between the number of modules that exist on a module against the number of memory banks on a memory chip. The idea of memory rank applies to all memory module form factors; however, the memory ranks are primarily focused on enterprise servers and workstation platforms because of the large amounts of data it deals with.

The memory rank is the block or area paved by using a few or all of the memory chips on the modules. Memory rank is usually a data block around 64 bits wide, whereas 8 more bits are added for the systems that support ECC, making the memory block 72 bits wide. Further, the number of modules, either one, two, or four blocks of 64-bit air 72-bit wide areas featured on the memory chip, indicates its rank, i.e., single-rank, dual-rank, and quad-rank. These ranks are usually represented on the module label as 1Rx4, 2Rx4, 2Rx8, or similar. 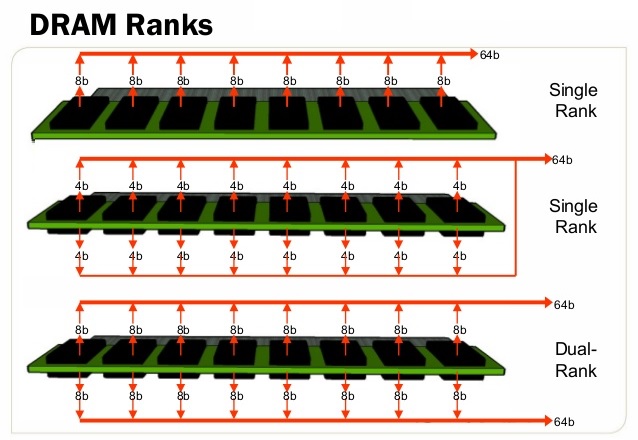 What is Single-rank memory?

Single-rank Memory (DIMM) features a single set of memory chips that enables the system to perform read-up and write-up functions. Also, these memory sticks feature memory chips on both sides of the module. However, it is necessary to note that these memory controllers consist of one rank at a time and are faster than dual-rank memory. And to ensure whether the memory stick is a single-rank, you can check the module’s label, which consists of all the ranks and bits of information. Single-rank is usually represented by 1Rx followed by the GBs it carries (1Rx8/1Rx16).

What is Dual-rank memory?

Dual-rank memory is a memory stick with two sets of memory chips. This multi-rank memory can facilitate high memory density, with two rows of 8GBs of RAM, which means a total of 16GBs. Further, these RAM configures greater width of up to 128-bit width as compared to 64-bit single-rank modules, and the memory controller has access to only one memory rank at a time to access read and write-up functions for the memory, making dual-rank RAMto be slower as compared to single-rank memory even though it consists of increased density and bandwidth.

What’s the Difference Between Single and Dual-Rank RAM?

There are several differences between the single and dual-rank modules, from functionality to capacities, that set them apart. For instance, single-rank RAM with a single set of memory chips is energy efficient and has lower heat emissions. At the same time, dual-rank RAM consists of two sets of memory chips that require more energy to operate. However, dual-rank memory modules are denser and can speed up data access by the memory controller. 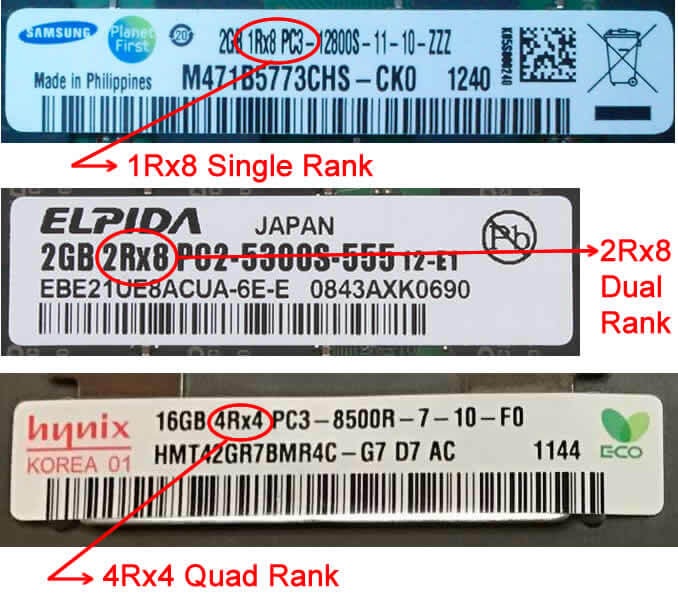 Additionally, to further differentiate both memory modules, the following are the two keys of the number of ranks provided on a memory module.

Most RAM technologies are more likely to be dual-rank; for instance, DDR4 RAMs usually consist of dual or multi-rank memory modules as they are considered the standard in personal computing. These RAMs are usually preferred because each memory chip consists of one gigabyte of storage and features two rows of eight memory chips, each on a dual-rank module.

To make better sense of single-rank and dual-rank memory, here is a guide on a side-by-side comparison of memory modules to choose the correct memory for your system.

One of the crucial factors to consider while choosing the right RAM is to determine whether it’s compatible with the system keeping the storage capacity in mind. For instance, most dual-channel memory can work with single-rank RAM. But if the system consists of more extensive storage of around 32GB, then the server motherboards usually require a combination of single and dual-rank memory to work efficiently.

The difference in single and dual-rank RAM is quite subtle. It is expected for the dual RAM to perform better as it consists of higher density and more memory chips. But the digital current and memory controller helps manage the data exchange with the RAM module as it can only access one rank at a time, regardless of the number of memory ranks. This results in a single-channel memory performing faster as it does not have to run through the sequential ranks to access the required data.

However, multi-rank memory helps increase efficiency by using alternative layers through a process where the second rank does not become redundant but goes through the fresh cycle while the memory controller accesses the first rank. These refresh cycles help reduce the memory response time and overall latency, which works in favor of dual-rank RAM.

Choose the right memory type to enhance the performance

You can find the best memory upgrades for servers, desktop and laptops from top manufacturers at Memory4Less.com. Our hardware experts are ready to help you select the right memory that will ensure faster data transfers with reliability. In case of any queries regarding finding the right RAMs, the memory experts at memory4less.com are always available to assist you through live chat, or you can also reach out to us by calling us at (800) 821-3354.

RDIMM vs LRDIMM – Which is better?

What are the different types of server memory?